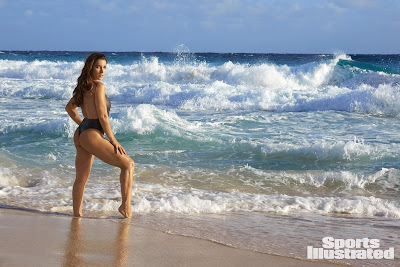 Christopher DeGroot, "The Delusion of Sexual Empowerment" from Taki's Magazine


A few weeks ago, Aly Raisman came to public attention for doing a brave and noble thing: testifying in court against Larry Nassar, the USA Gymnastics and Michigan State University doctor who, over two decades, had sexually abused her and more than 160 other girls and women. Thanks in part to Raisman’s testimony, Nassar has been sentenced to 175 years in prison. The public may feel grateful to the young woman.

Now we are hearing about Raisman again, although it is for a very different reason: She has chosen to appear naked in the new Sports Illustrated Swimsuit Edition. Raisman was in the 2017 issue, but then she wore a bikini, while now she wants to show us that she is “empowered.” With phrases such as “trust yourself,” “live for you,” and “abuse is never okay” inked on her flesh, the 23-year-old former USA gymnast serves as a symbol of delusional third-wave feminism. Says Raisman: “I hope that we can one day get to a point where everyone realizes that women do not have to be modest to be respected. We are free to draw confidence and happiness in our own way, and it is never for someone else to choose for us or to even judge us for that matter.”

The problem for a literal-minded millennial like Raisman is that there is an entire world outside herself: the minds of other people. That world is full of rich symbolic meanings, which cannot be altogether determined by the self—not even when you are the object of others’ perceptions and beliefs. Therefore, despite Raisman’s intention, the impression her naked appearance makes will be this: a mostly male audience will lust after her flesh, while paying only passing attention (if any) to “her message.””

Besides, a modest appearance, in formal contexts, simply means one in which the body is not an egregious distraction. There is no reason why, in a boardroom, or a doctor’s office, or a school, a breast, or a penis, or a vagina should be on display in such a manner as to receive attention from persons who have quite other business to attend to. The expectation of a modest appearance, found all over the world, is not “sexist” but simply adult behavior. Of course, the need for it is much greater in women, but that corresponds to the reality that women have much greater sexual power than men do.

A modest appearance has always been essential to the public-private distinction and to professional seriousness. A female lawyer or male lawyer who shows up half-naked to discuss a case with his or her colleagues would immediately prompt the following reaction: “Why is your body on such prominent display? What does it have to do with the business at hand?” Whatever might be the person’s strange motive, the body would of course have nothing to do with the case, so the lawyer would necessarily lose the respect of his or her colleagues. I once worked at a law firm where, for symbolic reasons, I and the others took care to appear professional (read: modest; conservative) indeed. When people are spending money, and their well-being is at stake, they do not equate, say, bursting cleavage with someone whom they can trust. For such a distinctly sexual thing is associated with the private sphere. Mixing the public with the private will suggest that something may be wrong with you. You are an amateur, or immature. You are acting on interests that are, as it were, irrelevant to why you were hired.

In the background of Raisman’s thinking, one detects the influence of recent feminist thought. While it is true that “abuse is never okay,” there is much more to protecting one’s self from abuse than such naïveté as “We are free to draw confidence and happiness in our own way, and it is never for someone else to choose for us or to even judge us for that matter.” A little while back, a female academic acquaintance of mine who was preparing to give a few lectures in Saudi Arabia told me that female colleagues had been informing her of precisely what not to wear while in that country, because Muslim men might spit on her (or worse) if she failed to comply with local clothing customs. Feminists have led American women to believe that they themselves should be able to determine how they behave at all times. But such a way of thinking, whether you are male or female, is unrealistic and asking for trouble. Our appearance, and actions, and words, have meanings that are far beyond our own ability to determine and control. That has always been so, and it is foolish to expect that to change.

Take the young woman who showed up at the actor Aziz Ansari’s apartment to begin their notoriously bad date. While that unusual action did not, of course, give the man the right to do whatever he wanted with the woman’s body, it wasn’t long ago that going to a man’s home, especially to begin a date, would have been universally interpreted as a sign of intimacy, of presumed romantic interest. While in the past it was understood that certain actions have inescapable symbolic meanings, today the truth of things is to be decided only by the self’s feelings. It is little wonder, for instance, that Ansari made a move on the young woman. Given how the date began, and the fact that she went home with him afterwards, nearly all men would have thought she was interested in them. Presumably, however, she wanted something more than mere sex. In other words, the date should have followed an old-fashioned model.

Like Ansari’s naive date, Raisman thinks that her own choices and judgments should be absolutely sovereign; the external world must conform to them, not vice versa. Meanwhile, her actions betray the impossibility of her words. If Raisman draws some “confidence and happiness” from appearing naked in a magazine, it is not because no one has “judged her.” On the contrary, the woman has been judged as sufficiently attractive to appear alongside the other models. Like other beauties, Raisman’s relationship with those who admire her is symbiotic: She needs their regard, even as their lust needs her for an object. It is not, then, that Raisman does not want to be judged. Rather, she wants to be judged on her own terms. She wants to dress however she pleases, while never being thought inappropriate for doing so, or suffering worse consequences. At bottom, this is a familiar fantasy: absolute individual autonomy, without any pesky negative effects.

I do not mean to be unfair to Raisman or insensitive to what she has been through. As she says, she is a survivor who wants to help other women to overcome sexual abuse. But she also seems to be a vehicle for the worst aspect of feminism: the self as some kind of magical being, with the ability to transcend perceptions and beliefs about one that do not issue from one’s self. Although nobody will ever have such a power, that vain hope can set many women up for trouble, and given what Raisman suffered at the hands of Nassar, there is a terrible irony in her being a voice for that popular delusion, the absolutely autonomous self.

No doubt Raisman got a pretty penny for taking her clothes off for Sports Illustrated, and perhaps down the road she may be able to use that appearance to gain in other ways. But in any case, there seems to be something rather sad about the matter. The assumption is that, by appearing naked in a magazine, Raisman is now “an even bigger hero.” Yet this just reveals how saturated our culture is with sex. Women do not want to be reduced to sex objects, but somehow female sexuality can be attached to any issue whatever, on the view that to be half-naked or naked is to be empowered by definition. This is bizarre, and suggests that, in their own hearts, women think that there is nothing to themselves but their bodies. In fact, however, they are probably just bored. Given the poverty of American culture, and the nagging dullness of their jobs, many women turn to the body for welcome relief from the monotony of their own consciousness. You are on display, so at least you are not bored.

Posted by Joe Conservative at 1:19 PM