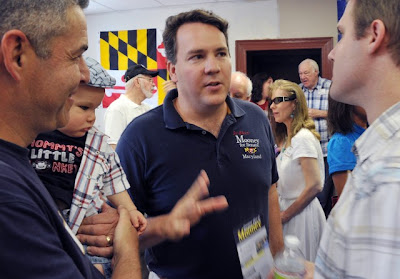 Departing state Sen. Alex X. Mooney has been elected chairman of the Maryland Republican Party after a contested election. He edged out Mary Kane, who ran for lieutenant governor this year.

We will have updates with the vote count and additional details right here.

Mooney can look forward to a season of change: Gov. Martin O'Malley and the Democrat-controlled General Assembly will be redrawing legislative and congressional districts, term limits mean the next gubernatorial race will be for an open seat and, for the first time since 1998, former Gov. Robert L. Ehrlich Jr. is unlikely to be the party's nominee for governor.

"The party is on the brink of making a change of some sort," Chris Cavey, a former chairman of the Baltimore County Republican Party said in a story published today. "It is at the crux of change. and [Saturday] is Day One."

Ehrlich's 14.5-percentage point loss to O'Malley last month in a year that was good for Republicans elsewhere has stirred debate within the Maryland GOP, with some saying the party should focus more on local elections than on the top of the ticket, while others want to aggressively recruit new members from Democratic strongholds such as Baltimore.
Posted by Joe Conservative at 1:29 PM