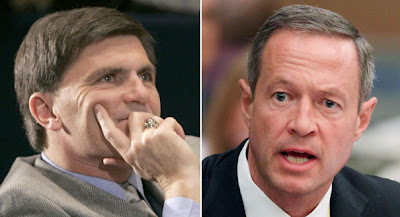 Catch the 1st debate again at the WJZ-TV website.

The next televised gubernatorial debate will not be held in the state of Maryland. It will be in Washington, D.C.

Gov. Martin O'Malley, a Democrat, and former Gov. Robert L. Ehrlich, a Republican, will sparwith each other for an hour at a live forum noon on Thursday.

The event, to hosted by The Washington Post, WAMU and WUSA, has been the topic of considerable bickering between the two campaigns, but came together shortly after today's WJZ forum.

It is free and open to the public but anyone wishing to attend must register and seats are limited, according to the Post. The Post offices are at 1150 15th Street, NW.

Also scheduled next week are two radio debates. One on Oct. 21 to be broadcast by WOLB and another the next day on Oct. 22 at WTOP.

One of the two radio debates between the state's two gubernatorial contenders is off the table - for now at least.

The Post's John Wagner reports that the debate planned in the Washington suburbs at WTOP radio was canceled because both candidates want to attend the funeral of Betty Peebles a co-founder of an important Prince George's County megachurch.

A spokesman for Republican former Gov. Robert L. Ehrlich said their camp "hopes" to reschedule and is "working" to do so. Rick Abbruzzese, with Team O'Malley, said they are "continuing to work" with the station and Ehrlich's campaign to find reschedule. With the election about two weeks away, the timing might be hard.

Ehrlich and Democratic Gov. Martin O'Malley with still face off at 8 a.m. Thursday at Baltimore's WOLB radio station.
Posted by Joe Conservative at 10:43 AM