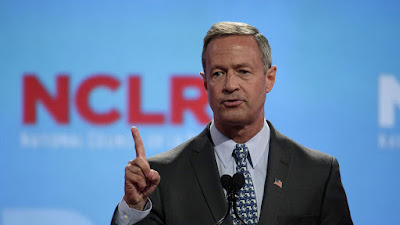 Former Maryland Gov. Martin O'Malley lashed out at Donald Trump on Monday, arguing that the Republican presidential candidate's recent comments about Mexican immigrants were "hate speech" and that the GOP should do more to distance itself from a "hate-spewing character."

"The real problem isn't that the Republicans have such a hate-spewing character running for president," O'Malley told the annual conference of the National Council of La Raza in Kansas City, Mo. "The problem is that it’s so hard to tell him apart from the other candidates."

O'Malley, who is seeking the Democratic nomination for president, was reacting to comments made by Trump during his announcement speech in which he suggested that immigrants entering the country illegally from Mexico were "bringing crime" and were "rapists." Trump has stood by the remarks even as several former business associates have distanced themselves in the wake of their controversy.

O'Malley's remarks appeared to be targeted as much at the GOP field at large than at Trump himself. Some Republicans have distanced themselves from Trump's remarks -- notably South Carolina Sen. Lindsey Graham -- but others have offered a more muted response.

"What does it say about the direction of today's Republican Party that Donald Trump calls all New Americans from Mexico rapists and drug dealers and murderers and the best their leadership can summon up is that they're divided,” O’Malley said.

O'Malley has a significant record in Maryland to tout to Hispanic groups such as La Raza. As governor, he helped push legislation through Annapolis in 2011 that provides in-state tuition at state universities for young immigrants brought to the country illegally, and he also ushered in a system that allowed undocumented immigrants to obtain drivers licenses.

The former governor also spoke out early in opposition to the way the Obama administration was handling last summer's crisis at the border, in which the number of unaccompanied children entering the U.S. from Central America spiked. A large number of those children wound up in foster care in Maryland, in large part because the state has a higher share of Central American families than many other places.

O'Malley said he plans to outline a more detailed plan for immigration on Tuesday.

You can bet that his plan will put 100,000 US citizens out of work. Given his druthers, O'Malley would give all the jobs to illegals. Let poor Whites and African-Americans live in Section 8 Housing and ABT cards.
Posted by Joe Conservative at 5:39 PM