The Election is Over, So Stay Away from Me! 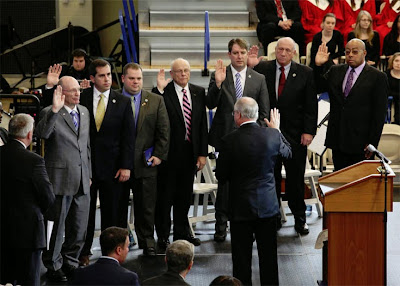 
Two months ago–prior to the election–they were eager to shake your hand and meet you, but now some members of the Harford County Council don’t want you calling them, don’t want you talking to them at the grocery store, and don’t want you approaching them to chat before or after the public council meetings.

Citing, among other things, “lone wolf activists” and potential terrorist attacks, Harford County Council President Richard Slutzky detailed a new proposed security plan Tuesday night, aimed at limiting the interaction between members of the county council, their constituents, and the press in the area near the council’s seating dias.

The Dagger broke the news Monday of the proposed security policy and, at the county council legislative session on Tuesday night, Slutzky took the blame for a wave of negative fallout over the proposal, calling it a “blunder.” Slutzky said his mistake was failing to mention that county council members are free to leave the dais at any time to talk with the public–as they always have been–but he reiterated that he wanted to create a “safety zone” around the dais in which the public and press are prohibited.

Blunders aside, Slutzky defended the new security plan, which he said was created with input from the Harford County Sheriff’s Office, adding he felt it was “a little unusual and inappropriate” for members of the public to approach council members on the dais before or after meetings. He continued by mentioning how Baltimore County uses a barrier and gate system to limit the access the public has to their representatives. Without citing specific incidents, Slutzky said there have been times when council members felt unsafe when approached by citizens during council meetings.

“A couple of times it got a little dangerous,” he said, and after the meeting cited a handful of incidents in which persons had to be physically removed from the building.

The crux of Slutzky’s policy is that “we live in a different environment” and that there are “lone wolf activists and many other things out there,” which could potentially seek to harm council members.

“We are still leery about certain citizens approaching the dais,” he added.

At the same time, Slutzky defended another unpopular council action – routing all citizen and media contact with the members of the council through new Harford County Council Director of Communications Sherrie Johnson.

Slutzky said council members are often contacted late at night, while at their full time job, while on vacation, and even stopped in the grocery store, which can become an issue. The intent of hiring a director of communications was to become more efficient in managing requests for information.

Slutzky said some members of the council supported the new policy, others did not, and others could see both sides of the issue. He said that, if directed to reevaluate the policy by members of the council, he would do so, but until that time the council would operate under a policy that neither press nor citizens may approach dais at a council meeting.

“Is the same Harford County that we all grew up in years ago?,” Slutzky asked.

Despite Slutzky’s claim of support among fellow council members for both the security and contact policies, the remaining six councilman wasted little time distancing themselves from them, and several said they were not aware of the “security zone” until The Dagger broke the news.

“In today’s day and age, we’re growing more obsessed with security,” said Councilman Mike Perrone, who added, “There are certain risks that are inherent with holding public office.”

The other members agreed.

Councilman Joe Woods: “It’s going to be business as usual for me.”

Councilman James McMahan: “I’m just as available today as I was yesterday.”

Councilman Chad Shrodes, who said he was unaware about the policy until Tuesday: “I’ll still continue to be available,” but will respect the safety zone.

Councilman Vincenti: “The bottom line is we’re an extension of our constituents, if you need us, you know how to get a hold of us.”

Councilman Curtis Beulah: “I have no boss here, I answer to the citizens. If you want to approach me, you should be able to approach me.”

After the council members spoke, several citizens took issue with the security and communications initiatives.

Vicki Seitzinger of the Harford Campaign for Liberty urged the council to collectively reject the policy. She said constituents would no longer be able to share their opinions and thoughts directly with a council member, but would instead have to deliver them third-hand through the communications director.

Morita Bruce, president of Friends of Harford, said “This meeting is really our time to talk to you and with you on various issues.”

At the conclusion of the meeting, a Dagger reporter gestured to Slutzky whether they could approach the dias to speak with him. Slutzky responded by motioning that he would come to the floor to speak. At the same time, a Harford County Sheriff’s Office corporal took up a position between the tables at the front of the room and the dias, offering an apologetic-seeming shrug to the reporter.

Perhaps Mr. Slutzsky would like an escort of lictors bearing rods and axes? The only question being "how many" he feels entitled to.

Posted by Joe Conservative at 9:56 AM