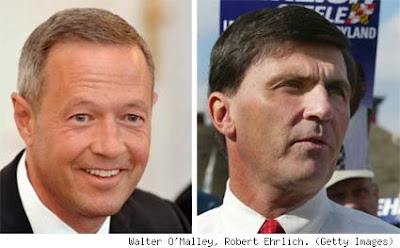 from The Baltimore Sun Newspaper

Out today is the first Public Policy Polling survey on the Maryland governor's race -- a matchup that seems to be attracting attention from pollsters right and left. The survey of 569 Maryland voters shows Gov. Martin O'Malley leading former Gov. Robert L. Ehrlich 45 percent to 42.

With a 4 percentage-point margin of error, they're statistically tied, as other recent polls have shown. Public Policy says the poll shows that Ehrlich is more strongly supported by his Republican party than O'Malley is by his Democrats. From the company's press release:

In the horse race 87% of Republicans support the former Governor while only 66% of Democrats support the current Governor. Republicans are united for Ehrlich and against O’Malley, while the Democrats are more fractured in their support.

In such a close race the undecided voters will play an important role. 12% of Maryland voters have yet to choose sides.

“The race is close. But with the clear support of his Republican base Ehrlich is off to a strong start,” said Dean Debnam, President of Public Policy Polling. “Most of the undecided voters are Democrats, gaining their support will be key to O’Malley’s success.”

The survey, an automated poll where the person who answered the phone presses a number to indicate his or her response, was conducted from July 10-12. Public Policy Polling, which is based in Raleigh, N.C., acknowledges that "other factors, such as refusal to be interviewed and weighting, may introduce additional error that is more difficult to quantify."

Asked about the poll, O'Malley campaign spokesman Rick Abbruzzese said, "We know this is going to be a close race." He said the governor is "continuing to focus on moving Maryland forward, making the tough decisions to get us through this recession and create jobs."

Ehrlich spokesman Andy Barth will be getting in touch shortly with a response. Ehrlich spokesman Andy Barth said, "There are a lot of polls between now and November. This one like yesterday's, shows it's a close race. We believe, in the end, more Democrats, Republicans and Independents will be persuaded by Bob Ehrlich's message of more jobs and lower taxes to vote for him."

Yesterday, a Rasmussen Reports poll also had the candidates in a statistical dead heat, with 47 percent of those polled saying they'd choose Ehrlich, and 46 percent picking O'Malley. And, earlier, a Magellan poll showed Ehrlich ahead of O'Malley.