Feeding at the Crony Capital Trough 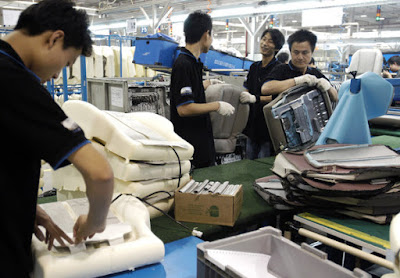 Employees at a Johnson Controls plant in Beijing working on a seat assembly line. The manufacturing giant, currently based in Milwaukee, announced plans to sell itself to the Ireland-based Tyco, in large part to reduce its annual tax bill by about $150 million.
from the MY Times


In the fall of 2008, with General Motors and Chrysler on the precipice of bankruptcy, executives at the car parts supplier Johnson Controls flew to Washington. The company’s president testified before a Senate panel and implored lawmakers to bail out the auto industry.

“Speaking for our company, and, I am sure for all auto parts suppliers, we respectfully urge the members of this committee, and the Congress as a whole, to provide the financial support the automakers need at this critical time,” Keith Wandell, then the president of Johnson Controls, said, warning that the failure of even one automobile company would “implode” the supply chain and lead to broad job losses.

Congress approved a bailout plan worth almost $80 billion for General Motors and Chrysler, saving the automakers and, indirectly, suppliers like Johnson Controls. By 2010, with its business back on track, Johnson Controls doubled the pay of Stephen Roell, then its chief executive, to more than $15 million.

Despite the federal government’s rescue — and hundreds of millions of dollars in tax breaks over the last several decades from states like Michigan and Wisconsin — Johnson Controls said on Monday it was renouncing its United States corporate citizenship by selling itself to Tyco International, based in Ireland, a deal struck in large part to reduce its tax bill, which it said should drop by about $150 million annually.

Monday’s announcement by Johnson Controls is just the latest effort by corporate America to flee the United States. In the last year, Pfizer said it was leaving for Ireland, as did Medtronic, the medical device maker. Coca-Cola’s largest bottling company, after selling its domestic operations, is heading to Britain. (The company, Coca-Cola Enterprises, insists it isn’t for tax reasons.)

Until Washington lawmakers reform the tax code, we will continue to see an exodus of American companies from our shores in search of a lower tax rate. By my count, based on a series of conversations with investment bankers, there are probably at least another dozen deals of meaningful size being negotiated in the pipeline. The question is what it will take for Congress to not only take notice, but to pass legislation to thwart this steady corporate migration.

The presidential candidates are paying attention. On Monday in Iowa, Hillary Clinton lambasted Johnson Controls. “It is outrageous when large multinational corporations game the tax code and shelter money overseas to avoid paying their fair share, including through maneuvers like inversions,” she said. “I have a detailed and targeted plan to immediately put a stop to inversions and invest in the U.S., block deals like Johnson Controls and Tyco, and place an ‘exit tax’ on corporations that leave the country to lower their tax bill.”

Even Carl C. Icahn, the activist investor who has long pushed companies to consider cost-saving maneuvers, has now begun to worry about the harmful effect of corporate inversions. He has begun waging a campaign in Washington to reform the corporate tax system.

“How will representatives and senators, with an election year approaching, explain to their constituents why they are out of work because their employers left the country, when it could so easily have been avoided?” he wrote on the Op-Ed page of The New York Times last month.

And consider this: Johnson Controls, currently based in Milwaukee, has aggressively sought — and received — a series of tax breaks and other deductions to do business in the United States. Between 1992 and 2009, the company received at least $149 million in tax breaks from Michigan alone. Last year, Johnson Controls had to pay a $3.75 million penalty to Michigan after it received a $75 million tax break in exchange for creating 400 jobs at its Holland lithium ion plant. The company fell short on the job creation, so it was forced to compensate the state and give up its tax-exempt status at the plant. In 2011, Johnson received a tax break from Kentucky in exchange for expanding its operations there.

Johnson Controls said on Monday that the Tyco deal was not a tax-driven transaction but was being done for strategic reasons.

At this point, it would be easy to cue the national anthem and argue about the need for corporate patriotism and loyalty to the United States. But unfortunately, simply shaming companies that reduce their tax bill through these inversion maneuvers isn’t a solution. And pushing for laws to bar companies from these deals seems increasingly quixotic. Every time a new tax law is enacted, the lawyers and accountants find a way around it.

Or change all laws that benefit the big corporation over flesh-and-blood individual-owned business'.

Posted by Joe Conservative at 4:27 PM