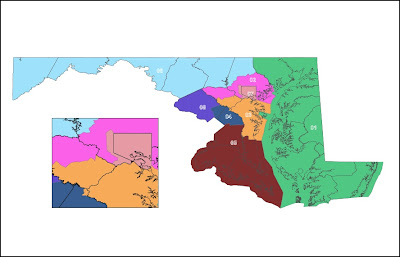 From the office of State Sen. Nancy Jacobs:

Today Senator Nancy Jacobs is introducing a bill for a “Good Government Redistricting Plan.” It has the backing of the Maryland Republican Party.

The plan from Governor O’Malley’s redistricting panel tears these communities apart. It denies people representation from like-minded elected officials who have their interests at heart. It doesn’t follow local community or county lines. Districts in O’Malley’s map looks like paint thrown on wall by a three year old.

O’Malley’s plan even disenfranchises his own democrat base. That’s because it’s not about citizens, but about grabbing more power and keeping incumbent Democrats in office. It’s totally self-serving.

My fear is none of these alternative plans will ever see the light of day. Will leadership only allow their plan to get a public hearing? Demand hearings. Call O’Malley. Tell him to listen to the people of Maryland because it’s the right thing to do.

*Respects existing county and municipal boundaries to keep communities of common interest together.

*Splits counties as infrequently as possible

*Protects the interests of voters rather than incumbent politicians

It's ALL about meeting Left-Wing whacko goals:

"Our State has an aggressive goal of generating 20% of our energy from Tier I renewable sources by 2022 and we intend to achieve that goal through as much in-state energy generation as possible. This will require a diverse fuel mix including onshore and offshore wind, solar, biomass including poultry litter, and now waste-to-energy if we are to realize our 20% goal."

- Governor O'Malley
Posted by Joe Conservative at 7:23 AM